One of my favourite moments in sessions with clients is when I get to ask the question, “What happened when you were <year and month of age>?”

Sarah – not her real name – came to see me this week for a new client introductory session.  After my explaining a lot of the dynamics of applied kinesiology and how we use it to communicate with the subconscious mind and the energy body to release trapped emotions and stuck energy, Sarah began to describe some of the physical issues she had been dealing with for some time in her adult life.  Food allergies, solar plexus discomfort, and a few other physical manifestations.  After chatting for a while, the conversation turned to what I intuited was the real source of a lot of her concerns: a growing sense that she didn’t feel “in her body”, that in the physical realm she was losing track of her identity, who she is.  When I asked if she felt like she knew who she was in the non-physical realm, who the pure original “Sarah” was in the energetic realm, she reflected for a moment, and realized that yes, that identity was intact.  That was the real her, and that identity was still there and consistent.

It was clear that Sarah was suffering from some degree of spiritual disembodiment. 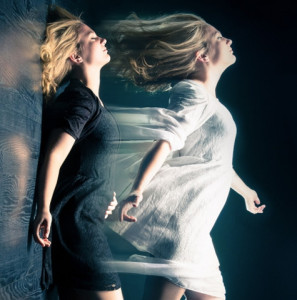 There’s many reasons for the physical body to feel detached from the energy – or spirit, or soul, or whatever other label works for you – body.  I believe this is a systemic issue for us all in this day and age, for a whole variety of reasons.  I put Sarah up on the table to delve a little deeper and find out what hers were.

I found a variety of experiences throughout Sarah’s life from which she had “trapped” emotions, creating energetic imbalances that were now manifesting as this increasing detachment between her two selves. Parental and family issues from early childhood; a right thigh injury she experienced while she was still in-utero (2nd trimester); some issues arising from romantic relationships later in life; and a collection of particularly traumatic emotions and core beliefs that were being stored in her subconscious mind and energy body as a “psychic trauma”.  This is when we experience a severely stressful event during which we go through several shock-based emotions all at once.  As a coping mechanism, we package all those event-based emotions as a bundle and shove it deep down inside, where we don’t have to look at it.  Often, other sensations and themes are packaged together with them; a song that was playing at the time, a particular colour, a smell … all of these can later be triggers for the emotions that they were packaged together with.

So what was this event that I was finding at age 6 years and 4 months that had caused Sarah to “trap” the emotions of failure, crying and lack of control, among others; and form a core belief of “I am lost” and “I am helpless”?  An event that kick-started a slow process of her lifelong detachment from her spiritual body?  I presumed that it was related to issues with her parents that she had described. I performed a clearing of those trapped energies so she could move on and not be weighed down by them anymore, but waited until she was off the table to ask her about it, as this was a good opportunity to validate the methods we use, the accuracy with which we can pinpoint life events as the root of energetic and physical imbalances.

She sat on the couch and I got to my favourite part of client sessions: “So … what happened when you were about six and a half?”  Something heavy came over Sarah as she thought back on that day.  ”Well,” she said (I’m paraphrasing), “There was a lot of stuff going on leading up to then, but … that was when I fell on a saw and ripped my left leg wide open.  It was pretty much the most painful event of my life. Very traumatic.”   None of this had come up during our earlier discussion.

“Do you happen to have any issues with your right thigh?” I asked.

Sarah immediately began rubbing her right thigh.  ”Yes.  I’ve had pain there for a long time.”  That was that in-utero injury she experienced still manifesting as pain and discomfort later in life, even though there was nothing really physically “wrong”.

Both of these highly traumatic events (any injury a baby receives while in-utero is highly traumatic), among other experiences throughout her life, were contributing towards her spiritual body taking a protectionist retreat from her physical body.  This is a natural defense mechanism.  The physical body experiences severe pain; the conscious mind experiences severe emotional pain; the subconscious mind is caught in the middle trying to figure out how to categorize and compartmentalize all that input; and the spiritual body basically hits the panic switch and tries to get away from all the pain.   As time goes by, the two bodies slowly separate, like ships drifting apart at sea, and the basis of a serious existential angst and some degree of identity crisis is formed, like an itch that cannot be scratched through any physical means.

How this manifests varies from person to person.  For some, it manifests as physical disease, illness or chronic exhaustion; for others, identity crisis (perhaps a contributor towards Dissociative Personality Disorder?); for others yet, a withdrawal from social life, or addictions aimed at numbing the itch, or self-harm in an attempt to feel connected with the physical body.  The manifestations are endless.

For Sarah, a huge piece of her puzzle has been identified, and we can now start working together on moving her beyond those energetic sources of the imbalance.  This is really exciting work, for both her and myself.

I do wonder how prevalent spiritual disembodiment is in our culture, particularly.  We don’t ground enough anymore, as we spend most of our time with rubber, wood and concrete between our souls and the Earth; we have a lot of ever-heightening astrological and cosmological influences that may be “shaking” our physical and spirit bodies apart; we are bombarded with toxic energetic influences that are surely displacing our innate balance of physical and energy bodies, and so on.  How many people are needlessly suffering from this state of existential anxiety and identity confusion as a result of something that can be fixed with relative ease?

If you feel like you may be suffering from some of what’s described here, I want to help you!   Just go to our appointments section and book a session with me online.  We can work together in person or remotely across a distance.